APRIL 1, 2020 – – – STRONG FRONT
Last night a front rolled in. We saw it coming using our predict wind app, and prepared by cleaning up and organizing the deck – and happy we did! Winds up to 20 knots were rocking us in the anchorage, yet it still proved to be a very comfortable spot. This morning we had very heavy rain in the early morning, which we enjoyed. The wind was shifty all day, and we continuously popped our heads out to make sure we were not coming close to hitting the wall.

APRIL 2, 2020 – – – JUMPING THE GATE TO GO ASHORE
Early this afternoon we dinghied to the Port Lucaya Marina; the very marina where we had previously docked by force. We had run out of fresh foods, and with our upcoming plans of going back to the states, we wanted to stock up on fresh veggies and fruits before our leave. It came as no surprise to find the marina deserted. We passed the little office on the water first, where there was a “temporarily closed” sign posted to the door. We motored on to the dinghy dock, and tied up. I had written a note a piece of paper, planning to tape it to our dinghy for just an occasion such as this, which read “We have had no contact with others   in over 14 days. We have run out of food and came ashore to get more. If problem with dinghy/docking, please call: ###-####. Thank you!” After pasting it to the  rubber edges, we walked up to the gate. The doors had a “closed” sign, “no trespassing”, that had been screwed to the outside of the gate in such a way that it locked us in from inside. We hopped the fence, and proceeded to walk to the grocery store. There was a line on the sidewalk for people wishing to enter the store, with tape on the ground to keep the groups of people 6 feet apart. Most people wore face masks, of some sort, including us. We were wearing a cut in half UV neck wrap as face masks. After shopping, we walked back to our dinghy to find it still there. Once back on the boat, we stripped our clothes, washed our bodies, and wiped down our purchase with alcohol.

APRIL 3 – 6, 2020 – – – STAYING PUT
We stayed put in the anchorage. Nothing significant has changed or happened. Working on our projects, and creating work route routines. 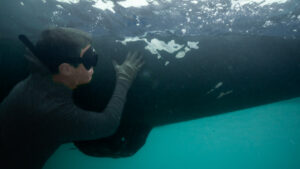 APRIL 7, 2020 – YOUTUBE RELEASE
We released our first video today on YouTube! Today I took charge of running the water maker. The Norwegians had snuck away by morning. Tomorrow the PM should release another order.

APRIL 8, 2020 – – – UPDATED ORDER, FUELING UP
An update to the Bahama covid19 order has been made, which now specifically states foreign cruisers. All cruisers are to immediately make their way home, and are not permitted to go on land. We VHF’d the Grand Bahama Yacht Club in the morning to ask if we could fuel up on diesel and gasoline – making sure to mention we were planning on leaving the country very soon. The man said if we could be there in 10 minutes, we could fuel up. We hurried and filled up two jerry cans. The man was very nice, we kept our distances. His marina was quiet and empty. We made a separate trip back to give the man our immigration cards. We think we will be leaving tomorrow.

APRIL 9, 2020 – – – WEATHER HAS TURNED
The weather has turned and we decided not to leave yet. We want to make an overnight sail from Lucaya to Cape Canaveral. I’m not thrilled to be going back from where our home base was just a few months ago. Getting in through the inlet, bridge, and lock is a pain and time consuming, and I fear we’ll get there and go straight to the marina we lived in and sit for much too long in its comforting familiarity at the dock.

APRIL 14 – 15, 2020 – – – GULF STREAM CROSSING
We left today, at 9:30am. We woke up, had coffee, and picked up the anchor and left. As we were exiting the inlet, ocean spray was reaching our bow. I went below deck, as we forgot to close the hatches!, and in doing so began to feel some seasickness. We initially passed a lot of stopped or anchored tankers, and really saw no one on the waters for recreation. We pulled our sails as we rounded Freeport. The waves were coming on our port beam, and not as following seas like had been predicted. After we both shook off our initial woozy stomachs, the day sail was enjoyable, though we were both nervous for our upcoming overnight sail, a first for just the two of us. The day went by fast! The two of us only had granola to eat; our nerves were stealing our appetites. As the evening came, the winds got stronger and it was climbing to 15 knots. We had both sails up, but were having some trouble periodically with the head sail getting back winded. As the sun set, our anxieties rose. It was overcast, there was lightening in the distance, and we had no light from the moon or stars. It made even seeing the waves impossible, and it was a mind game to sail in to a seemingly dark void. The winds were reaching 25 knots, and we took in our head sail, and reefed the main. Even with this, we were sailing at 10 knots! Periodically we motor sailed, if just to get through the Gulf Stream faster. The next afternoon was to bring some storms to Cape Canaveral, and we wanted to be through the lock before this happened. Around midnight, we were almost hit by a tanker. Brian was on watch when in the distance he saw ship lights, but they were so far away they were just going to be something he kept his eye on. I was trying to sleep on deck, but was failing to do so. I looked over to find the ships AIS on our chart plotter. The ships AIS transmission was in and out on our plotter, then suddenly the collision time showed as 2 minutes – the ship, at that moment, still seemed far enough away. After looking at the AIS details, we saw the ship was traveling north at 22 knots, and us headed west at 10 knots! To take down our sails we would have needed to turn to port, right towards the ship. Had we turned to starboard, we risked jibing. Brian put the throttle down as much as it would go, with us climbing up to 13 knots, in the middle of the Gulf Stream. He hailed them, “Texas Oil Ocean City, Texas Oil Ocean City, Texas Oil Ocean City – do you see us?!!!”, panicked. The captain of the tanker responded in the smoothest, calmest voice “Yes, I see you, I’m turning to starboard. Do you have lines out? I’ll give you plenty of room”. We felt lucky to have made it out of that; and how a tanker had any maneuverability, we may never know. We tried to take nap shifts, but neither one of us slept much until early morning – perhaps because we became accustomed to the movement of the boat. We almost collided with another tanker, but we learned from our first encounter and were able to turn to starboard enough to sail parallel with the ship until it passed. Around 4am, the moon came out, and it was beautiful! Much more comforting to sail with some sky light! And we finally had our following seas. Resting 2 hour naps were had by each of us. By 10am we approached Cape Canaveral. There were many cruise ships anchored just outside the cut. I smelled BBQ coming from one ship, and I was starving! Our rudder seemed stiff once we started hand steering, but by this point the winds and waves were rough. We tried to anchor just past the lock, but it was decided to stay a few days at the marina to see if we could find any issues with our steering cables and/or rudder. We check in to the states with no problems using the CBP Roam App. We came to the marina office and were happy to see friendly, familiar faces – plus it was nice to speak to other people. We heard a place was still open, delivering pizzas, so we ordered 2 large pizzas and a liter of coke (very unlike us). Brian ate a whole pizza, and so did I. We slept for the remainder of the day and night.

APRIL 16-30 – – – DOCKED IN MERRITT ISLAND
At first, we were only going to stay a few days at Harbortown Marina, in Merritt Island, before continuing our journey north. This, however, easily turned in to almost a full month’s stay. Our slip was the T-dock, which we soon learned is now our favorite type of slip – you have the best views! We spent some time with family, a few friends, and did some maintenance on our boat. Having a place for mail to be sent to was a major advantage, given we had a lot of parts to order. Our steering seemed tight as we initially entered Cape Canaveral’s channel, so we spent time working our steering situation. We serviced our wenches, which we believe has maybe been done once in our boats lifetime, as the state of them were awful. We were surprised to find not many people in Florida seemed to take necessary precautions to protect themselves against Covid19.